So they often need a bit of livening up with a bit of extra fun, like karaoke, a dancing hedgehog, making foil animals, dressing up as pirates, a mariachi band, an egg and spoon race, swapping teams, anything to keep people “engaged”. 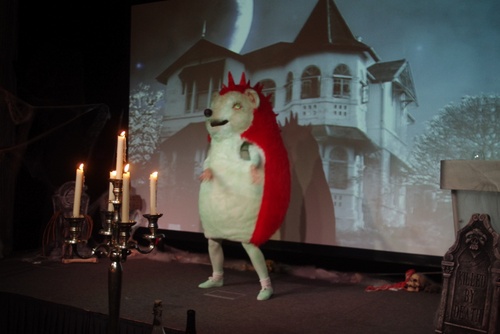 Or that can be what people think if they’ve been to one too many slightly dull quiz nights where the questions were on the quizmaster’s favourite topic, and read out one after the other monotonously before the 30 minute wait at the end for the answers and the scores.

Now, don’t get me wrong, I’ve seen all the above extra activities at quizzes I’ve run (and a lot more) and sometimes they can be a hoot, if they’re well organised, well coordinated, the atmosphere is good. But do I, fundamentally, think a good quiz night needs them, that the evenings were “enhanced” by them? Well, to be honest, no (apart, I admit, from the dancing hedgehog, which was amazing!). And quite often, indeed significantly more often, the very opposite. Evenings where the pudding is overegged, where too many cooks might spoil the broth, are a recipe for disaster (yes, I just wrote that ridiculous sentence, and I’m sticking with it).

I know, quiz nights aren’t everyone’s cup of tea (can I not escape from the food and drink theme today …). Quite often, I see people wandering in to the quiz, moaning a little good-naturedly – “Oh no, I’m terrible at quizzes”; “Oh no I don’t know any pop culture”; “I hope it’s not too hard”; “Remember the last quiz when Steve made it all about golf!”. And it is quite often on the back of Steve’s slightly underwhelming quiz on a heavy golf theme that QuizQuizQuiz is called in, as it’s decided that it’s probably worth seeing what the professionals can do.

And we deliver. I believe. Our quizzes are not boring, they’re anything but. The fun and excitement comes not because of forfeits or dressing up as jockeys or silly prizes, but because we genuinely know how to make a quiz exceptionally fun and everything but boring. Our quiz nights have really good quiz questions, quizmasters who know what they are doing and are knowledgeable and engaging. Our quizzes are fair, not dragged down by “dead air”, and everything rattles along at a good pace. There is something for everyone, even the person who thinks they’re rubbish at quizzes, because we explain what’s going on all the way through, because we have questions which involve music, interesting visual cues, and unusual and surprising thought processes. And we have all sorts of tricks up our sleeves according to what we think will suit the quiz night in question.

When I run a quiz, I don’t look out and see people looking bored – they look attentive, sometimes fiercely engaged with their team mates, sometimes delighted, sometimes furious with themselves. They sing along (who needs karaoke, and don’t get me wrong, I love a bit of karaoke) sometimes they even dance, they find themselves involuntarily performing actions relating to questions, and they cheer along.

That’s what quiz nights can be like – both competition and celebration, and really, anything but boring; that is, when they are done properly. If not, then wheel out the dancing hedgehog.

All About the Music New Adventures in Quizzing
Scroll to top