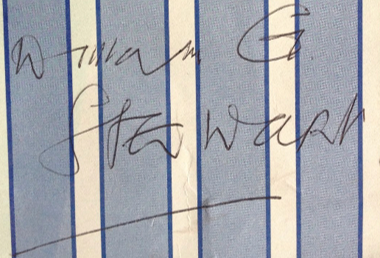 Although it’s now a few months since he died, I thought I’d write about William G. Stewart, the host of Fifteen-to-One. I loved Fifteen-to-One as I was growing up – it is easy to forget what an oasis of quizzing it was in the early-to-mid 90s. University Challenge didn’t come back till 1994, Millionaire and The Weakest Link weren’t until later, there was no Only Connect, no Pointless, no The Chase. There were a lot of game shows, a lot of light entertainment, but not all that much in the way of serious quizzing.

I knew I liked quizzes – I retained information well and tended to do pretty well when teachers ran quizzes at the end of term. We played Trivial Pursuit at home, too, but apart from that, too young for pub quizzes, there weren’t many avenues for regularly testing my quizzing abilities.

15-to-1 was a dream. Half an hour of compact, solid quizzery. It was usually on at 4, before Countdown, so I quite often didn’t get back from school in time for it, but I’d always watch it in the holidays. The format was notoriously spare – a means to whittle down 15 hopefuls to one winner as quickly and efficiently as possible.

It was brutal – there was no chat, just 2 (or 3, depending on what round you reached) lives, no coming back another day (unless you won the episode – and there were some exceptionally fine quizzers among the daily and series winners). But that was what I, and other people, loved about it. This kind of crisp format needed the right host, and it had it.

I think William G Stewart might even be a little underrated as a quiz host. Not surprisingly, how to run a quiz well is something I’ve given a great deal of thought to in the last decade or so. There are different types, as there should be, but, of his type, I think Stewart was the very best.

His persona was utterly disinterested in small talk, but he was not cold or pompous. He didn’t disdain one answer and elevate another. He read perfectly, he managed to give off the impression he’d written every question (I genuinely thought for the first couple of years that he had! I understand that he did review most, if not all, questions in detail in advance in a way that Bamber Gascoigne did and Victoria Coren Mitchell does). His authority was total, but the quiz, not the personality, led the way.

I actually went on 15-to-1 (pretty unsuccessfully) in my early 20s, in either his last, or penultimate, series. It was pretty much what it seemed like on TV, except, slightly to my surprise, he was quite warm and chatty, putting us all at our ease. Unused to the magic of TV, this break in character slightly shocked me. I blame that for my poor performance …

It also strikes me, looking back, how good the questions seemed to be on 15-to-1. There were, of course, easier and harder ones, but not wildly so – they were always really well calibrated to make a good game. They always seemed like they were on fair knowledge. I know now how hard that is to achieve, and they managed it over and over (and over) again.

I wonder if I’d have got in to quizzing the way I have if it wasn’t for 15-to-1.Perhaps the same is true for other quizzers. It remained a staple throughout university and beyond.

Perhaps when it finished in 2003, its time had passed – that was the age of big money quizzes which also had reasonable credibility, like WWTBAM and The Weakest Link.

I’ve only watched the rebooted show, presented by Sandi Toksvig, a few times. It seems good, a little warmer, slower and more human (as well as there being a serious cash prize for the series winner), and now contestants get to come back (which I would have killed for, but equally it was part of the attraction of the show that it was so brutal).

I think my own taste in quizzing has changed, and I’m a bit more of a fan of a slower pace than 15-to-1 these days. Still, no one should underestimate the importance of William G Stewart in the history of British quizzing.

What makes a quizzer?